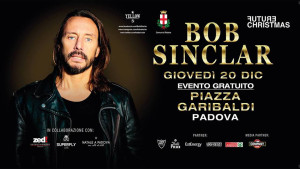 For one night, Thursday 20 December at 21.30, Piazza Garibaldi returns to be the international stage of a spectacular dancefloor under the stars, the most anticipated Christmas show with the live performance of Bob Sinclar.

After earning his fame as one of the most popular DJs on the international scene, he achieved great success in 2005 with the song Love Generation, obtaining the prestigious World Music Award for best DJ in the world. In his long career full of hits and millions of records sold, 87 million views on YouTube, millions of followers on the web, 9 albums on the record and after having signed more than 60 hits that have climbed the top of the charts all over the world , Bob Sinclar can boast collaborations with great international music stars such as: Daft Punk, Sean Paul, Mika, Lionel Ritchie, Pitbull, Cerrone, Steve Edwards, Shabba Ranks, Shaggy, Axwell, Craig David, Master Gee and many others. Event promoted by the Municipality of Padua as part of the "Christmas in Padua, a City of Stars" initiatives, in collaboration with Future Vintage Festival, Zed Live and the media partnership of Radio Company.